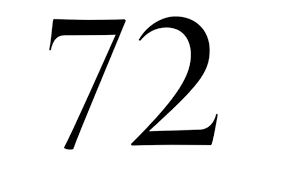 “After this, the Lord appointed seventy-two others and sent them two by two ahead of him to every town and place where he was about to go.” (Luke 10:1 NIV)

Who are the Seventy Two?
How did Jesus recruit them?
Did they go to a Bible College?
Did they do the Alpha Course?
Were they in right standing before men and God?
Were they a people with high morals, and high standards?
Were they religious?

Who did Jesus spend most of his time with? Who became his friends?

Ordinary people, families, secret followers, doctors, secret religious authorities, adulterous, tax collector, people who like to party and eat and drink lots, girls with a very questionable reputation. Hard working fishermen, some of them women who cooked meals. Hurting fathers and mothers wanting their sons and daughters to get healed, high roman officers, the sick, the widow, the thieves,  the oppressed, the possessed, people without hope and people wanting to be loved.

I believe that these were some the seventy-two!

These 72 met the one who is TRUTH and LIFE.

Dario is a husband, father, pastor and passionate pursuer of Jesus and His Kingdom. He is a Pastor, loyal friend, and walks the walk when it comes to being a carrier of God's presence. He expects things to happen when he prays for people. He loves having fun and eating olives (preferably at the same time). View all posts by darioleal

This site uses Akismet to reduce spam. Learn how your comment data is processed.

Always good to have Aslan watching over you!
Vaccination morning..
Beauty
Love this place
Amazing! Belfast!

Reflections of a Blue Collar Christian

A Word and Spirit Blog